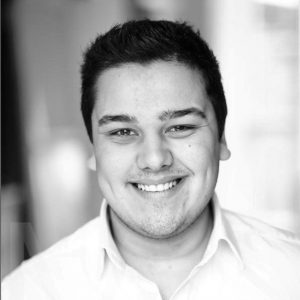 I originally trained as an actor at one of the UK’s top drama schools in London, graduating in 2016 with a BA (Hons) in Acting and have appeared in productions with the likes of The National Theatre of Scotland and the BBC. From there, I became heavily involved in the world of corporate role-play, training, facilitation and eventually coaching.

Now as a qualified Executive Coach (ILM Level 7), accredited member of the Association For Coaching (AC), and with a Post Graduate Certificate in Counselling, I utilise all of my experiences to deliver a holistic coaching relationship that looks at the whole person in relation to their goals, adopting a practice that is largely centred around a balance between self-acceptance and supportive challenge, working only with what is within the client’s remit to achieve.

As a consultant, I take inspiration from theories of Transactional Analysis and Emotional Intelligence models to deliver long lasting and authentic behavioural change. As an associate of the Social Enterprise Exceptional Individuals and someone with half-Palestinian heritage, I also have a particular interest in coaching those who identify as neurodivergent and working with leaders from an ethnic background.

I enjoy the theatre (of course) as well as gaming, fitness and getting out into the Scottish countryside, as well as a slightly eccentric passion for trains developed in very early childhood.

We use cookies on our website to give you the most relevant experience by remembering your preferences and repeat visits. By clicking “Accept All”, you consent to the use of ALL the cookies. However, you may visit "Cookie Settings" to provide a controlled consent.
Cookie SettingsAccept All
Manage consent

This website uses cookies to improve your experience while you navigate through the website. Out of these, the cookies that are categorized as necessary are stored on your browser as they are essential for the working of basic functionalities of the website. We also use third-party cookies that help us analyze and understand how you use this website. These cookies will be stored in your browser only with your consent. You also have the option to opt-out of these cookies. But opting out of some of these cookies may affect your browsing experience.
Necessary Always Enabled
Necessary cookies are absolutely essential for the website to function properly. These cookies ensure basic functionalities and security features of the website, anonymously.
Functional
Functional cookies help to perform certain functionalities like sharing the content of the website on social media platforms, collect feedbacks, and other third-party features.
Performance
Performance cookies are used to understand and analyze the key performance indexes of the website which helps in delivering a better user experience for the visitors.
Analytics
Analytical cookies are used to understand how visitors interact with the website. These cookies help provide information on metrics the number of visitors, bounce rate, traffic source, etc.
Advertisement
Advertisement cookies are used to provide visitors with relevant ads and marketing campaigns. These cookies track visitors across websites and collect information to provide customized ads.
Others
Other uncategorized cookies are those that are being analyzed and have not been classified into a category as yet.
SAVE & ACCEPT